The majority of keys to cars built after 1995 contain within the keys head a transponder chip. The purpose of a transponder chip is to disarm a vehicle immobilizer when the car key is used to start the engine.

So in short the cars ecu sends an electronic message to the key via the arial ring and as long as it receives the correct message back then the car starts, if the wrong message is received ie the wrong key is used, then the car remains immobilized and wont start.

Many believe that there key is normal and doesn’t have a transponder in it, but if built after 1995 then it has but its embedded in the plastic head of the key, so not visible to the eye.
So for a vehicle to start, you must have a key that is cut correctly to turn the lock and programmed correctly to start the vehicle.

The exception to this is rover systems and some land rover systems, in these systems the transponder chip is fitted within the separate remote.

Transponder is short for transmitter + responder, in basic terms a transponder is a small electronic chip that has what is called a non volatile memory, this is a memory that does not require constant energy for retention of coding, also known as magnetic coupled transponders which are passive in nature, this means they do not require their own power source to function, so are very limited in range, thus the need for them to be in the ignition to disarm the immobilser.

The process of key identification is similar in most automotive transponder systems. Once a key is inserted into the ignition lock and turned to one of the ‘on’ or ‘run’ positions, the induction coil that is mounted around the ignition lock sends out an electromagnet field of energy. The windings in the transponder chip absorb that energy and power the electronic chip to emit a signal.

The signal is usually an which is considered the identification code. The induction coil reads the signal and sends it to some type of computer device to recognize the signal. If the signal is recognized as being already in the computer’s memory the signal is accepted and other electronic components in the vehicle are set into motion to allow the starting of the vehicle or the continuation of the engine running.

Transponder chips used in car keys come in a number of design types ranging from carbon chips to glass chips. 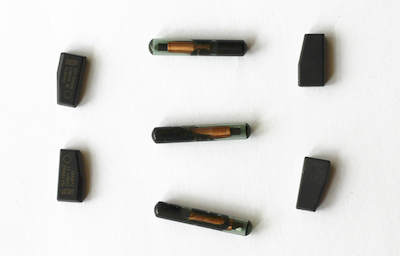 Some vehicles use a transponder chip that’s integrated with a remote circuit board and attached to the board a prime example of this is with the Renault megane key cards, a picture of one of these is below

These work in the same way as separate transponder chips.

Initial transponders used in many early models of vehicle were known as fixed code systems, this means that the transponder chip holds a fixed code that remains the same code throughout its life, these chips can be duplicated simply and clone keys produced, so it became evident that more secure technology was required, so the crypto chips were introduced, these work in the same way, but the code changes after each use, the vehicle ecu gives the key a new code every time its used. 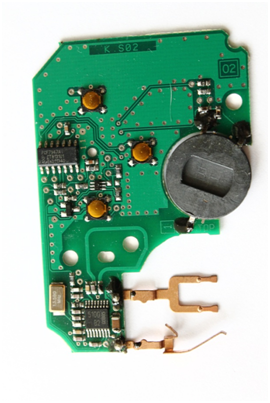 In some models additional security was then added where unique coding based upon the vehicles chassis number needs to be precoded to the transponder chip before it can be programmed to the car, this prevented the use of 2nd hand keys as once precoded to the vehicle it could never be recoded to another vehicle.

Most makes added an extra level of security where a pin code unique to your vehicle between 4 and 12 digits needs to be entered before the diagnostic equipment is permitted to talk to the ecu and program a new key.

Most manufactures add new and altered levels of security each year, so this is a constantly upgrading and changing market that improves year on year, however despite the level of security on the chip improving, all transponders in all keys work in the same basic way.

Remotes are similar to transponder chips in that early ones were fixed code and then progressed to rolling code and on to keyless entry.

All in all your car key is a complex and often expensive piece of kit, so look after it.

Thank you for comming out and opening my van on saturday night , i rang a number of so called 24 hour locksmiths and you was the only ones who answered the phone , martin was a lifesaver and had me in my van in minutes , thanks

mick haslam
Nottingham Car Keys
2013-09-10T22:17:42+00:00
Thank you for comming out and opening my van on saturday night , i rang a number of so called 24 hour locksmiths and you was the only ones who answered the phone , martin was a lifesaver and had me in my van in minutes , thanks mick haslam
https://www.nottinghamcarkeys.co.uk/testimonials/thank-you-nottingham-car-keys/
having lost the keys to my ford smax i called nottingham car keys for help , help they certainly did , the locksmith arrived in 25 mins and 11 mins later i had to new keys for my car .

when they say they will have you mobile again quickly , they really do mean quickly