via our fully equipped mobile service vans, we stock a wide range of toyota keys on our service vans.

in some situations we offer Toyota key reprograming 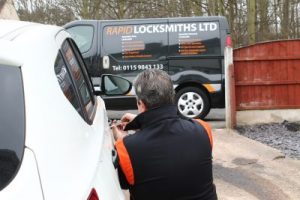 We offer a wide range of Toyota Keys and Toyota Remote keys to our customer in Nottingham , DE postcodes , Leicester and Loughborough

We carry stock of these and strive to offer a same day or next day service to replace lost or stolen toyota keys .

Even when all keys are lost , we can normally offer a fast efficient service to replace your lost car keys and remote keys

its easy to have a lapse and lock your keys in your car or boot , even pets and children can cause this situation

our skilled locksmiths will attend you vehicle and pick open the locks to retrieve your keys all 100% damage free .

An example of Models We Work on Include ;

as well as many more models of toyota vehicle

and cover a large area including in Nottinghamshire , Derbyshire and Leicestershire.

Why Not fill in an online quote request or ring 01159 843133 for a quote for your Replacement Toyota auto keys or Toyota remote keys .